“Energetic, dynamic and full of unbelievable talent, Sandy is an unforgettable vocalist who knows how to wow an audience. Her powerful vocals and theatrical flair captivate audiences whether it’s a low-key intimate setting or a high-level party.”

Sandy is a highly, versatile, professional performer whose voice “wows” audiences and has over 30 years experience.  As a multi-award winning artiste,  she has the knack to get the hairs to stand up on end from one of her showstoppers and in the next breath, have everyone up dancing and partying the night away.  Sandy has such an extensive repertoire and style and  often hears the words “Unbelievable Talent” “Fantastic” “Best I’ve heard”.

Based in the North East of England, Sandy is an outstanding artiste, who has been singing and performing to audiences for most of her life. Her first Public performance when she was only 5 at Castle Howard, Leeds in front of Les Dawson. After getting the Bug for performing she continued in theatre performing professionally at the age of 9 in the role of Annie at Newcastle Royal. Sandy also competed at a National Level in Gymnastics alongside her formal training in singing and dance, and as she grew, became the triple threat with Singing, Dancing and Acting. 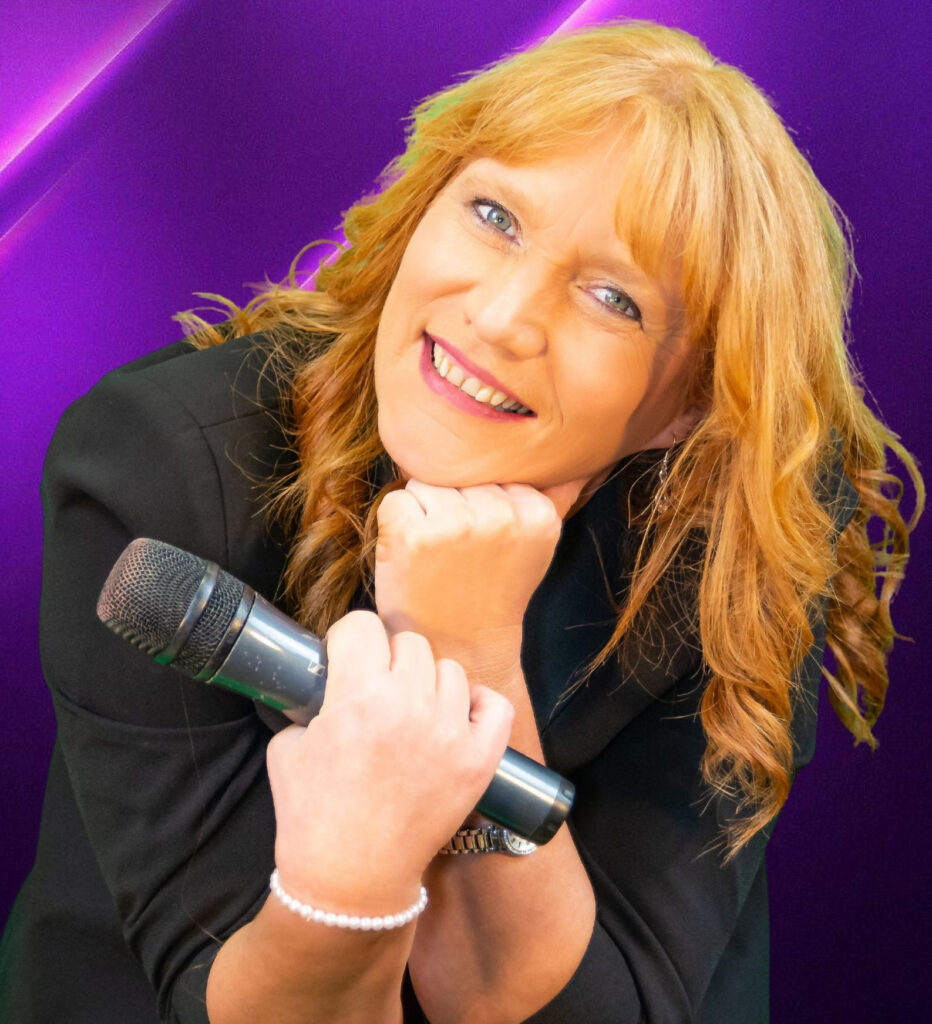 After the death of her Mother at just 11 years old, Sandy went through a challenging time and used her performance in theatre to hide what was going on in her home life. At age 18, she moved from the North East of England to work for the Foreign and Commonwealth Office in London after her step-parents advised her to “get a proper job”. Sandy used this move to follow her dream and continued performing including some top stages on the West End in London such as the London Palladium. She has had leading roles from Sandy in Grease, Narrator in Joseph, Mabel in Pirates of Penzance.

Sandy took a long break from singing after her marriage failure to bring her children up and focus on them.

After her son had a serious accident, she gave up her job as a Bank Manager. Throughout this time she never lost her passion and started her successful Performing Arts School Adlib, which focuses on confidence-boosting and self-esteem of students producing 2 shows a year in Theatres.

Sandy initially joined a Wedding/function/show band after being coaxed into auditioning and was their lead singer which reignited the passion for performing live. Alongside this, she quickly became the “voice” and was asked to perform solo in different venues from public to private, intimate sized venues to large Corporate Venues.   Her solo career has since leapt forward, more rapidly then she could have ever imagined,  and with over 800 songs currently in her repertoire has the ability to adapt to most styles.  These include Rock to Opera, Cheesy Pop to Disco, Swing & Jazz, Musical Theatre to Showstoppers. She has since performed around both the UK and internationally from private functions to 5* hotels and Cruise Liners with names such as Jurys Inn, Le Maya Grotta Hotels, TUI Hotels, Mercure Hotels.

With an extremely varied and large repertoire spanning from easy listening ballads, big show-stopping ballads, to modern day hits and classic floor fillers, Sandy can work with you to create a bespoke set perfect for your event, so that you can simply relax and enjoy the occasion knowing that the music is covered.